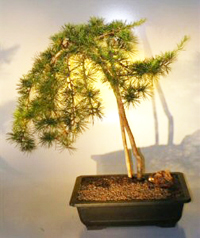 It is a hardy tree that needs to be kept outdoors so it can be exposed to cold temperatures during winter months.

Origin: Native to the west coast of North America, with its northwestern limit on the Kenai Peninsula, Alaska, and its southeastern limit in northern Sonoma County, California.

Appearance: It is a dense evergreen shrub with  needle-like leaves and attractive cinnamon-color furrowed bark. Leaves are emerald green, strongly flattened in cross-section. The crown is readily distinguished by the pendulous branchlet tips.

Flowering: It produces small pendulous cylindrical cones that turn from green to gray-brown.

Outdoor/Indoor Use: It is a hardy tree that needs to be grown outdoors.

Propagation: By seeds and cuttings.