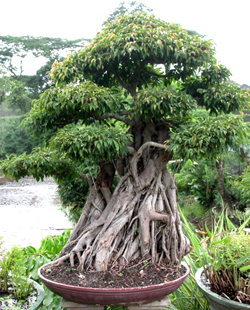 Ficus Bonsai Tree is a very common houseplant. With over 800 species and 2,000 varieties of ficus, everyone can find the right tree for their bonsai. One of my favorite varieties of ficus is a dwarf ficus also known as Ficus benjamina.

If you are a beginner, ficus benjamina is one of the best choices. It is very forgiving, easily adapts to varieties of conditions, has naturally small leaves and strong roots, making bonsai training much easier. Ficus Benjamina is also commonly known as Weeping Fig, Benjamina Fig, Benjamin’s Fig, Dwarf Ficus Tree, Java Fig, or just Ficus Tree.

Ficus Bonsai Tree is native to south and southeast Asia and Australia. Like most tropical plants, Ficus Bonsai likes warm and humid weather and needs to be protected from freezing temperatures. It can be grown outside if you live in a tropical or sub-tropical climates. If you live in the area where temperatures drop below 60 degrees, it is best to keep your ficus bonsai indoors.

Origin: South and southeast of Asia and Australia.

Appearance: Ficus Bonsai Tree is a beautiful evergreen that has a smooth grey bark topped with dense umbrella-like canopy of pendant branches and oval, shiny leaves. Ornamental leaves droop hence the name Weeping Fig. It will grow wider before it grows taller. I has interesting aerial roots that are often used in a clasped-to-rock style. Roots are fragile at first but get stronger over time when provided with enough nutrients. 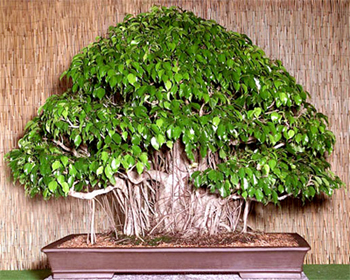 Outdoor/Indoor Use: Both. You can grow it outdoors if you live in a tropical or sub-tropical climates.

Water Requirements: Ficus Bonsai Tree likes occasional misting. Like most tropical plants it likes moist but well drained soil. Allow enough time between watering for the soil to dry out. Touch the soil every day with your fingers . When you feel the soil is dry, provide it with some water. While it can tolerate dry conditions, do not allow the soil to dry out completely. I found that if overwatered it will start losing leaves. 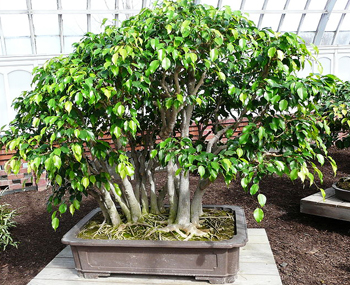 Pruning/Training: Ficus Bonsai Tree has small leaves, but if you want to reduce them even more, use pruning. You can use wiring any time of the year but to avoid wire marks, don’t leave the wires for more than few months. The best time to wire it is when the shoots are a little green. Because of the strong root system, ficus bonsai is great for air-root and root-over-rock styles.

Fertilizing: Fertilize it with well balanced fertilizer during growing season.

Repotting: Ficus Bonsai Tree should be repotted once in two years during Spring. Some will grow rapidly enough that yearly repotting may be necessary.

Hardiness: USDA Zones 9-11. Needs to be protected from temperatures below 60 degrees.

Insects and Diseases: Scale insects and mites can be a problem.