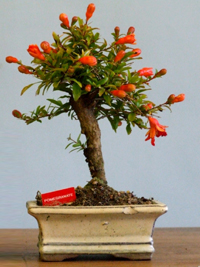 Pomegranate Bonsai Tree, scientific name Punica Granatum, is a deciduous tree that will drop all or most of its foliage during winter. It is mostly grown for its beautiful ornamental red flowers and juicy tasty fruits.

It is very long-lived tree that is known to have survived two centuries. They grow best in the dry Mediterranean climate. The Punica granatum nana is a dwarf variety often used for creating a bonsai tree.