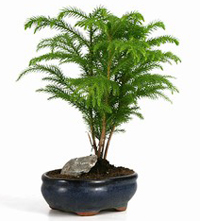 There is some confusion between Araucaria heterophylla and Araucaria columnaris that looks like A. heterophylla when young but changes its appearance as it gets older.

Pine trees are one of the less difficult species to grow in a bonsai form. 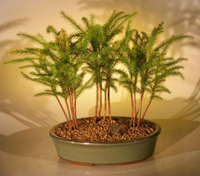 Origin: Native to Norfolk Island in the southern Pacific Ocean, east of Australia.

Appearance: Has a straight vertical gray-brown trunk with symmetrical branches. On younger trees leaves are narrowly wedge-shaped. Mature trees have scale-like overlapping leaves. In the wild this evergreen can get up to 200 ft tall.

Light Requirements: If prefers full sun but can also adapt to partial shade.

Water Requirements: Likes well drained soil. Allow for the soil to dry between watering. It doesn’t like moist soil. Water more during summer months and less during winter. Avoid overwatering. Never allow the soil to dry out completely.

Pruning/Training: You can wire it at any time of the year. Avoid keeping wires for longer than four months. This is not an easy tree to prune, since you can’t just cut the tip of the leaf. During spring months, prune new buds while they are still light green. If you prune it the wrong way, it might stop growing. You should practice on several inexpensive trees before giving it a try.

Hardiness: Does best in the USDA Zone 10-11. Needs to be protected from freezing temperatures.

Propagation: By seed or cuttings.