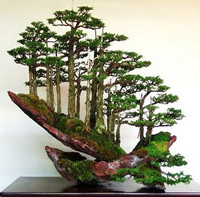 Chinese Bonsai, known as Penjing, was created in China thousand years ago and got to Japan during period of Zen Buddhism around 1195.

Once it was introduced into Japan, bonsai art began to develop in its own way.

At first, only aristocrats of Japan had access to this kind of art. It was a symbol of prestige and honor. But as time went by Chinese bonsai got very popular and was introduced to the public.

In comparison to Japanese bonsai, Chinese bonsai is not only about miniature trees or group of trees. Big part of the Chinese bonsai reserved to creation of miniature scene using various nature elements like rocks, stone, and water. You can find a landscape design that doesn’t use any trees and consists only of rocks.

Both styles will give you different feeling. Here are images of Japanese bonsai, tree with pink flowers, and Chinese bonsai, composition of the forest.

When you look at Japanese bonsai, you get a feeling of peace and harmony. You notice that bonsai artist spent a lot of time trying to make a perfect shaped tree that is beautifully designed.

Now, take a look at the Chinese bonsai composition. It has a surprising effect, that inspires you to create something amazing, something unusual that haven’t been done before. It gives you a feeling of mystery and magic. It is all about dynamic shapes and movement. This is a great example of a true Penjing art.

One of the main differences is that Japanese bonsai has strict rules and styles, while Chinese bonsai is more about inner beauty. Japanese bonsai artists are always trying to reach perfection in making their trees look like neat miniature copy of the bigger trees. It makes Japanese cute design very predictable.

I’ve been bonsai enthusiast for a while, but discovering Chinese Bonsai absolutely blew me away. I was amazed how much freedom Chinese bonsai gives you. Chinese bonsai is full of contrasts and dramatic forms that resolve in a dynamic balance.

I hope my explanations made sense and now you have a better understanding of Chinese Bonsai. Have a wonderful day.