Japanese Black Pine Bonsai Tree, scientific name Pinus thunbergii, belongs to genus Pinus which contains over 110 species and  is one of nine genera in the family Pinaceae. This evergreen has needle-like green leaves that grow in pairs.

It produces small reddish flower that are followed by brown cones. It is very tolerant to strong winds and salt spray. Historically, this has been one of the most important species used in Japanese architecture. 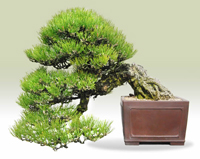 Appearance: The greatest asset of this tree is its striking furrowed into irregular plates bark that is gray when the tree is young changing to black as it matures. It has horizontal  light brown branches that turn grayish with age.

Branches are covered with glossy stiff dark green needle-like leaves which grow in pairs denser near the tips of the branchlets. In its native habitat black pine can grow up to 100ft tall. 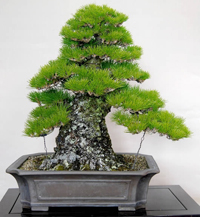 Water Requirements: Needs regular watering with some drying time between watering.  Water more during growing season from spring to fall and less in the winter. Pines don’t like permanently moist soil. Use well draining soil mixture.

Pruning/Training: To give this bonsai an aged look, you can bend down the branches and thin the leaves by plucking needles that grow inside and under the branches. That will expose the heavily fissured bark.

Bonsai Style: All styles except for broom.

Repotting: Repot every two to five years depending on the root growth and age of the tree. Use fast-draining bonsai soil mix.

Hardiness: It grows best in the USDA Zones 5-8. Back Pines are very hardy but still need to be protected from winter weather.

Propagation: By seeds, cuttings and grafting.