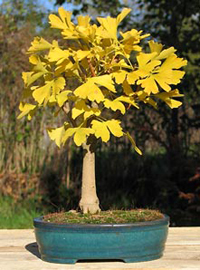 Ginkgo Bonsai Tree, scientific name Ginkgo biloba, was originally native to North America but disappeared until it was rediscovered in the 18th century in China.

I has light green leaves that turn beautiful yellow color in the fall. This tree is hardy and should be grown outdoors. Needs to be protected from frost because of the fragile roots.

Pruning should be done carefully since scars don’t heal well.

Appearance: Ginkgo biloba is the oldest living tree species. A single tree can live as long as 1,000 years. In the wild it can grow up to 115 ft tall. It has short stiff branches and fan-shaped light green leave that turn beautiful yellow color during fall. Light brown to brownish-gray bark is deeply furrowed and becomes highly ridged with age. 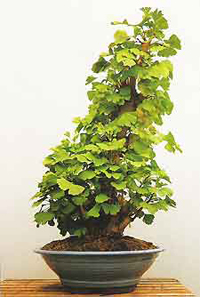 Flowering: Ginkgo is dioecious meaning male and female flowers are borne on separate trees. Male flowers are pendulous catkins that pollinate pistillate flowers on female trees in March and April. On female trees, flower are followed by tan-orange oval inedible fruits that grow in clusters producing a strong odor. For this reason, male trees are preferred. It is not as important in bonsai than in landscaping because Ginkgo bonsai rarely produce fruits.

Pruning/Training: During spring and fall, prune shoots on young trees to four or five nodes and on older trees to one or two nodes. You can cut branches before the new growth begins. Pruning should be done very carefully because scars don’t heal well. Avoid making large scars. Since Ginkgo has a fragile bark wiring is not recommended. If you need to wire, make sure to check it regularly to avoid bark marks. 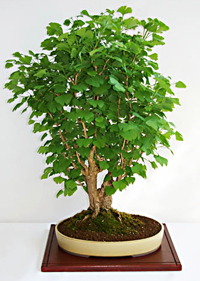 Fertilizing: Feed it with well balanced liquid fertilizer once every two weeks during growing season.

Repotting: Ginkgo should be repotted once every one to five years, depending on the root growth and age, in spring before the new grow. It likes moist well drained soil. Use regular bonsai soil mix.

Hardiness: It is a hardy tree that can grow in USDA Zone 3-8a. It should be protected from freezing temperatures since the roots are very fragile.

Propagation: By seed, cuttings or grafting.