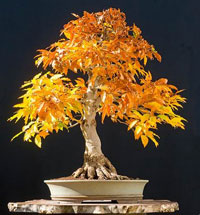 This is a hardy tree that should be grown outdoors. Ability to take radical pruning makes this tree perfect for bonsai.

Appearance: It is a deciduous tree with a smooth gray trunk and erect branches covered with simple, wavy, oval leaves. Leaves turn tan during fall months and remain on the tree until the spring, adding to the tree’s seasonal interest. It has brown, slender, long, pointed, buds like rolled cigars. 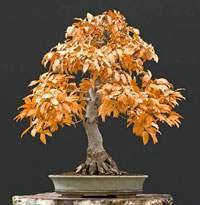 Pruning/Training: In early summer pinch shoots back to two nodes. I recommend shaping it by pruning when possible. If you are applying wiring, do it during summer months. After few month carefully remove the wires. Never remove all the leaves during growing season.Also, avoid leaf pruning after reporting the bonsai.

Fertilizing: Feed it with well balanced fertilizer one month after the buds open. Apply fertilizer once every two weeks during growing season.

Repotting: Should be repotted every two to five years depending on root growth and age. Repot during spring before leaves open.

Hardiness: This bonsai should be protected from freezing temperatures. Grows well in USDA Zone 4-7.

Insects and Diseases: Usually healthy but can be troubled by fungi, leaf scorch, borers and scales.