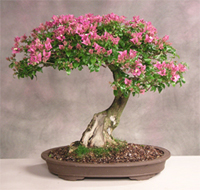 Origin: Native to China and Korea but is widely grown all over the world. 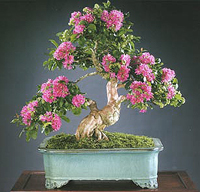 Appearance: Depending on variety, crapes grow as trees that may be either upright or spreading or as large shrubs. It is a deciduous tree with very interesting smooth gray bark that is peeling in thin flakes exposing mottled inner bark in some combination of gray, pink, cream, tan, and brown colors. Dark green leaves turn red, yellow and orange during fall months.

Flowering: One of the main reasons why this tree is so popular is its six-petaled white, red, pink or purple flowers that are produced from June until September. Flowers are born in clusters in the beginning of the summer, followed by brown or black fruits. When mature they dry and split releasing disk shaped seeds.

Outdoor/Indoor Use: Both. It is really an outside tree that can be grown indoors if provided with bright light and cool temperatures during winter months. Cool temperatures are required in order to trigger dormancy indoors.

Light Requirements: It prefers full sun. If grown indoors place near the window with a lot of natural sunlight.

Water Requirements: Should be watered daily during growing season. Needs less watering during winter months. Do not allow the soil to dry out completely. 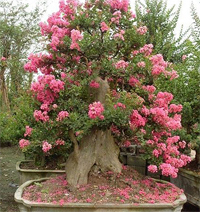 Pruning/Training: I don’t recommend using wires since bark is very fragile and wire can easily leave a mark. After the blooming is over, prune shoots back to two or three leaves to style and promote development of flowers the following year. Next crop of shoots will bear the flowers and should not be trimmed until you can see where the flower buds have developed. You need to decide if you want a year-round neat tree or flowers. If you want flowers, don’t pinch out any growth until late summer.

Repotting: Needs to be repotted every year or three depending on the root growth and age, in early spring before leaves unfold. It likes moist well drained soil, so you can use a standard bonsai soil mix.

Hardiness: Grows best in USDA Zones 7-9. This tree is hardy but needs to be protected from freezing temperatures. Maintain 45-50F temperature during winter.

Propagation: By cuttings or seed. Easy to root.