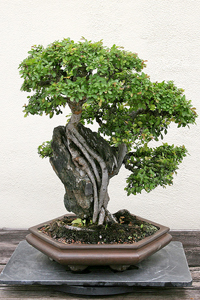 Chinese Elm bonsai tree has small glossy green leaves and corky bark. It responses very well to pruning by producing mass of new shoots. This is really a great tree for bonsai because you can use any style you like including slanting, straight-trunk, group planting, and broom styles.

Needs to be watered regularly during growth season, from beginning of the spring till the end of summer. Keep the soil moist with good drainage. Chinese Elm bonsai tree needs less watering during winter. Don’t let the soil dry out completely.

Chinese Elm bonsai tree pruning is very easy. Branches need to be pruned in spring before the growing season starts. At the end of spring cut back new shoots to one or two leaves as soon as they grow out of line. Two new shoots will grow at each leaf node. 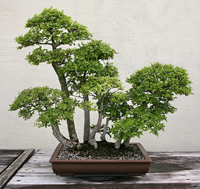 Chinese Elm bonsai tree that comes from Japan is very hardy. It can tolerate freezing temperature for a short period of time when mature enough. It is best to protect Chinese Elm bonsai tree from sever cold during winter because it contains a lot of water in the roots that might get damaged when the water expands as it freezes.

It does the best in the temperatures from 30F – 90F. The ideal location is USDA Zone 4 or 5. Chinese Elm bonsai from China and Korea are hardy, but not acclimatized for freezing temperatures.

Chinese Elm bonsai is a problem-free bonsai. Under stress can experience problems with aphids, scale insects, or spider mites if grown indoors. Powdery mildew might develop if the air circulation is poor and roots are dry. 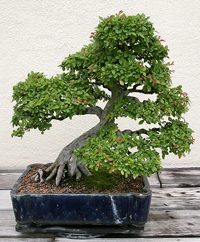 Chinese Elm bonsai tree needs to be repotted every year when younger and once every two years when the tree is older. The reason for frequent repotting is because Chinese Elm bonsai likes a lot of water which causes soil to break down over time. Fresh soil holds water better and also provides roots with more oxygen.

There are a lot of different places you can get a Chinese Elm bonsai from. My friends and I buy all of our bonsai trees online from “Bonsai Boy” Nursery located in New York. I tried buying bonsai trees from other sites, but they had much higher prices and the trees were not always properly trained. “Bonsai Boy” has the lowest prices and highest quality bonsai trees you can find. This family operated company has been in business since 1993. It has been really great experience for me. To buy Chinese Elm click on the links below: