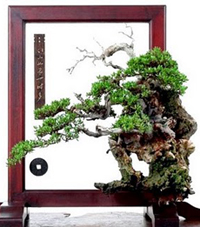 Chinese Bonsai, also called Penjing, is about creating a miniature tree or a landscape in the container. Chinese artists believed that by better understanding nature they will improve their spiritual development.

This beautiful art form was originated in China thousand years ago. Bonsai was created by highly educated aristocrats of China, inspired by nature, poetry and landscape paintings. These different art forms were linked closely together.

Each area of China had its own bonsai style, specializing in a certain species of tree, certain training techniques and certain type of design. There is a deep Chinese philosophy behind each bonsai tree and landscape scene. It is more about revealing an untold story and discovering mysteries of nature.

Penjing is about chaos and creativity that is not trying to obey rules and reach perfection. Its main goal is to create a beautiful journey that reflects different aspect of life and nature. Chinese bonsai tree often represents an animal or a Chinese character. One of the best examples of the distinctive tree representation is a Chinese dragon, which symbolizes prosperity and good fortune. Sometimes in pursuit of unusual design concept, Chinese artists would create a “weird” or even “ugly” looking bonsai tree.

Some Chinese artists would refuse to use a wire, so popular these days, and prefer clipping technique, because they believed it requires more skills and patience. Wires were very expensive and hard to find in China, so most of the artist used “grow and clip” technique to style their bonsai trees. That is why this type of training is more developed in Chinese bonsai.

The beautiful picture of Chinese bonsai, that you see here, is one of the amazing art works of Robert Steven, a bonsai artist from Indonesia.

Penjing is not only about miniature trees in the container. It is much wider concept of creating natural scenes using different elements of nature like rocks, stone, water, sand and trees.

Some of the compositions consist only of rocks representing mountains. It is not unusual for the Penjing landscape to have mostly rocks and very few trees or no trees at all. Chinese bonsai art is full of contrasts which create rhythm and dramatic tension resolving in a dynamic balance.

Penjing art can be split into 3 main types:

1. Tree Penjing (Shumu Penjing) – Is an art of creating miniature tree or several trees in a small shallow container. Very often Chinese bonsai represents an animal or a character. It is not about creating perfection but showing the inner beauty of the tree. 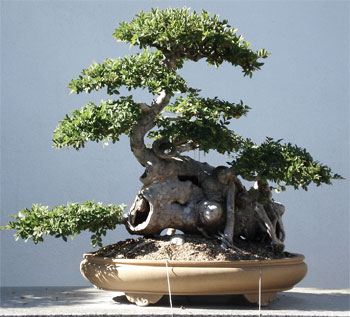 2. Landscape Penjing (Shanshui Penjing) – Is an art that uses rock as a main component in the landscape composition. Artists are trying to design a natural mountain scene that may or may not use trees. The focal point in this type of art is rock and if trees are present in the landscape, they play very minor role in the composition. Think about it as a rock garden. 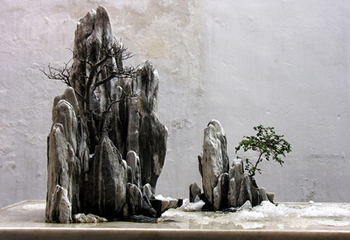 3. Water and Land Penjing (Shuihan Penjing) – This type of art uses trees, rocks and water as a material. The goal is not only to create a most realistic landscape, but also to tell a story. 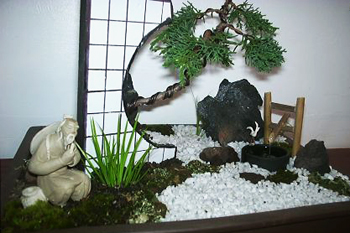 Bonsai art was introduced to Japan during period of Zen Buddhism around 1195, where it began to develop in its own way.  At first, only aristocrats of Japan had access to this kind of art. It was a symbol of prestige and honor. But as time went by Chinese, bonsai got very popular and was introduced to the public. 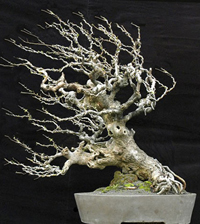 One of the main differences is that Japanese bonsai has strict rules and styles, while Chinese bonsai is more about inner beauty. Japanese bonsai artists are always trying to reach perfection in making their trees look like neat miniature copy of the bigger trees. It makes Japanese cute design very predictable. Because Japanese bonsai art was born from Chinese bonsai they both have a lot of similarity that makes it sometimes quite difficult to distinguish.

As I’ve mentioned before, Chinese bonsai is not only about miniature trees or group of trees, but also about creation of miniature scene using various nature elements like rocks, stone, and water. You can find a landscape design that doesn’t use any trees and consists only of rocks.

Both styles will give you different feeling. When you look at Japanese bonsai, you get a feeling of peace and harmony. You notice that bonsai artist spent a lot of time trying to make a perfect shaped tree that is beautifully designed.

Now, take a look at the Chinese bonsai composition. It has a surprising effect, that inspires you to create something amazing, something unusual that haven’t been done before. It gives you a feeling of mystery and magic. It is all about dynamic shapes and movement. This is a great example of a true Penjing art. 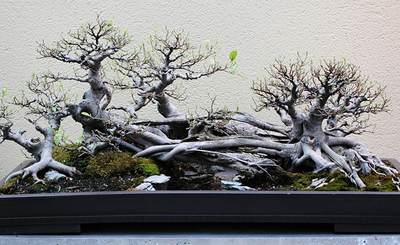 Penjing has much less strict rules and is more philosophical and spiritual form of art than Japanese bonsai. A high quality Chinese bonsai composition has to look entirely natural. Although there is more freedom in the Penjing, many of the general bonsai rules still apply.

To create a successful Chinese bonsai composition you need to know basic training techniques and be familiar with plant maintenance like re-potting, watering, feeding and etc. After learning the basics, you’ll have better control of your plant. It will also make it easier for you to pick the right tree for your bonsai.

It is important to cultivate feeling of balance when you are putting all the elements together. They should complement each other and express natural look. In-depth observation of nature is a key to a successful Chinese bonsai. Often compared to poetry or paintings, Penjing is a manifestation of Nature.

Chinese bonsai is really about your imagination. Balancing rules against innovation always creates a challenge. If you are a beginner, I would suggest following the rules. When you feel more comfortable start experimenting.

I’ve been bonsai enthusiast for a while, but discovering Chinese Bonsai absolutely blew me away. I was amazed how much freedom Chinese bonsai gives you. Chinese bonsai is full of contrasts and dramatic forms that resolve in a dynamic balance.

When you look at well done Penjing art piece, time stops and it feels like you are in a different world full of mystery and magic. It is not easy to make a Chinese bonsai composition with natural elements that complement and relate to each other creating harmonical composition.