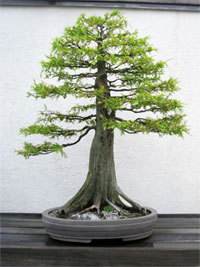 Bald Cypress Bonsai Tree, botanical name Taxodium Distichum, is a great bonsai for beginner who is just getting started in the hobby. It is inexpensive and very easy to grow.

Bald Cypress can be found in many swampy areas of Florida and Louisiana. It grows up to 100 – 150 ft tall and can live well over 1,000 years.

Despite the fact that most of the species from this family don not loose their leaves in winter bald cypress does, hence the name “Bald Cypress”.

Appearance: Bald Cypress Bonsai Tree has a reddish-brown to grayish trunk with small flat ridges and shallow furrows. It is topped with a crown of light green almost feathery leaves that are tiny needles that grow in 2 rows along slender branches. Each needle is about 1/2 inch long and 2 mm wide. Unusual for coniferous trees, Bald Cypress Tree is deciduous tree, meaning that it sheds the leaves at the end of a growing season and regrows them at the beginning of the next growing season.

One distinctive feature of the Bald Cypress Bonsai Tree is that it develops so called “knees” which some believe the tree needs to support itself when it gets tall. You can easily develop those knees by going 3 years without repotting your bonsai. Because of the small space, the roots will have no place to go and the tree will start to grow long heavy roots. Carefully bring few of them closer to the tree. Later, you will see what roots will work best as a knee and get rid of the others.

Flowering: Bald Cypress Bonsai Tree is monoecious, meaning it has male and female reproductive units on the same tree. Pear-shaped cones form in the early spring turning from turn from green to brownish purple as they mature from October to December.

Outdoor/Indoor Use: Both. This bonsai can be kept inside but will grow better outside. 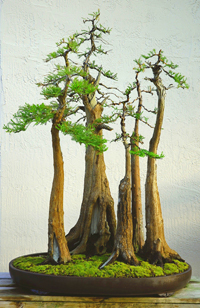 Light Requirements: Likes full sun. If kept inside try to provide as much natural light as possible. Great location would be next to the big window.

Water Requirements: With Bald Cypress Bonsai Tree you don’t need to worry about over watering. This bonsai thrives in wet, swampy soil. Water it every day, all year round. You might even need to water it twice a day during hot summer days.

Pruning/Training: Because Bald Cypress Bonsai Tree grows upright in nature, it can easy be trained upright, weeping, deadwood, or bonsai forest style. You can train Bald Cypress Tree any time during spring and summer. Shape the leaves by pinching back new growth. If you want to develop new branches, don’t prune new leaves that emerge directly from the trunk. Some of them might develop into nice branches.

Fertilizing: Needs to be fertilized on the weekly basis during spring and early summer. Decrease fertilizing in the late summer and fall to once every 2 weeks. You don’t need to fertilize it over winter. 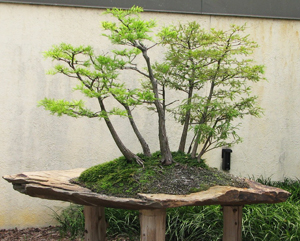 Repotting: Because Bald Cypress Bonsai is a fast growing tree, it needs to be repotted on the yearly basis. Root should be pruned when bonsai is dormant.

Hardiness: It grows well in USDA Zone 5B – 9. The range of the bald cypress includes southern Delaware to south Florida, west to Texas and north to southeast Oklahoma, southwest Indiana, and southern Illinois. Bald Cypress Bonsai Tree likes tropical weather and needs to be protected from freezing temperatures.