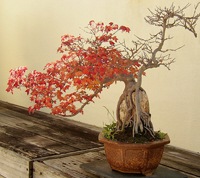 One of the main features of Trident Maple is that it can take heavy root pruning, which makes it perfect for bonsai. You can use different styles with Trident Maple bonsai tree, including curved-trunk, broom, group plantings, and clump styles. Root-over-rock style is also very popular because of the rapid root growth.

Needs to be watered on the daily basis during its growth period, from the middle of spring to the end of summer, since roots have high water content. Trident Maple bonsai tree requires much less water during winter time, so keep the soil moist but well drained.